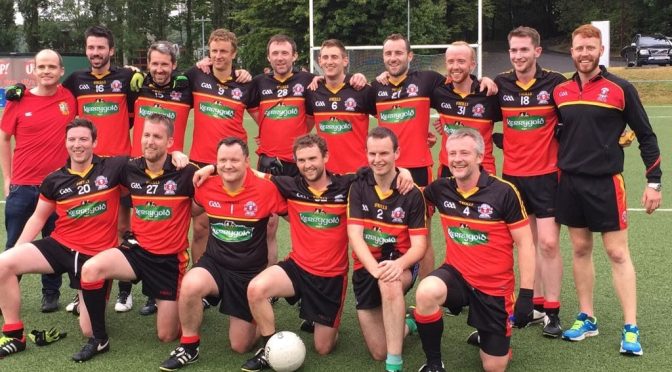 We’ve always had a strong Gaelic football setup here at Belgium GAA and our Mens’ Gaelic football team more often than not is competing for Championships by the end of the season. We have two Mens’ football championships to our name – 2008 and 2012 – but have been close on a number of other occasions.

2017 is no different and the team will be working hard again this year with the aim of being crowned Champions, first of the Benelux Championship this summer, and afterwards the pan-European Championship in the autumn. The team has been going through a transitional period over the last couple of years with lots of new players coming into the setup to replace some of the departing Championship winners, but the panel is strong this year and will be confident going into Championship.

2017 also sees a new management team take over, and the team is in safe hands: Declan Treanor, who has played at the highest level of the game in Ireland, takes over as player-manager. Additionally, former Belgium GAA player Ciaran Hudson comes in to the backroom team to assist Declan and is joined there by Damien Columb and Paul Quinn.

We are always looking for new members of the football panel, so if you are interested, be sure to get in touch.

What is Gaelic Football?

Gaelic Football is a popular Irish team sport played between two teams of 15. In Europe, we play a 9-a-side version of the game. The objective is to kick or punch the ball over the opposing team’s crossbar (1 point) or kick it into the goal (3 points). Here’s a nice video of some of the best players in Ireland showing how it’s done. Keep an eye out for former Belgium GAA clubman and Down inter-county star, Ryan Mallon at 0:35!

What a game! Get in touch and give it a try – I promise you wont regret it!

If you want to join up, email:  pro.belgium.europe@gaa.ie