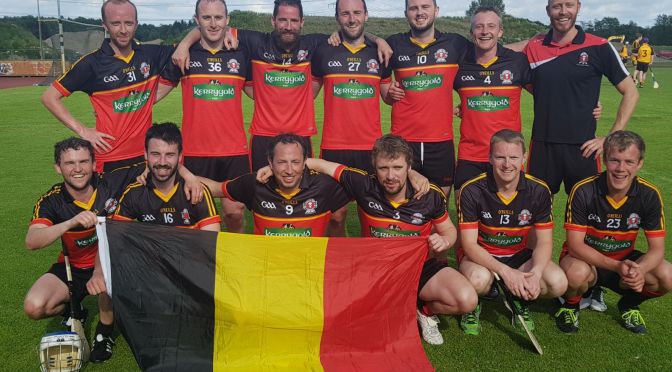 Hurling has always been an important sport for Belgium GAA and one in which we have achieved a lot of success over the years. The hurlers are the current European champions, having won 7 European Championships including completing an impressive 4-in-a-row in October 2016. The hurling team is currently managed by Limerick man, Brendan O’Donoghue.

The team competes in a Europe-wide Championship that runs from May to September / October and consists of 5 tournaments. Hurling in Europe is currently a 9-a-side game (having previously been 11-a-side), which makes for face-paced, high scoring and enjoyable contests. Belgium competes against teams from the Netherlands, Luxembourg, Switzerland, Scandinavia and Germany, with the team that accumulates the most points over the 5 tournaments being crowned Champions.

If you’d like to get involved and join the team, newcomers are more than welcome, and we cater for all levels.

The hurlers are in good hands with an experienced team in charge.

Good question! Hurling is an ancient Irish sport that is thought to have been played for over 3,000 years. Played with a stick (hurley) and a ball (sliotar) teams aim to score goals (under the crossbar) and points (over the crossbar) to win the game. Words wont do it justice though, see it for yourself:

Magic isn’t it? Well now that you’ve seen it, come on down and give it a try!

If you want to join up, email:  pro.belgium.europe@gaa.ie

Another challenge that some of our club members are participating in is an initiative to raise money for the Robin Food organisation that provides soup to those in need. Run or walk 19km in a week (2 - 10 May) and monitor your progress on Strava. The registration fee is €7.95 which covers the cost of three litres of soup. More information in how to sign up here 👇 https://www.zatopekmagazine.com/je-cours/covid-19km-challenge/ . . . #lockdown #challenge #coronavirus #run #walk #charity #solidarity
Sports and solidarity are joining forces in this great initiative to get around the world in 80 days. Every km (run, walked or cycled) counts, just like every contibution, no matter how small. Sign up here and spread the word 👇 https://facebook.com/events/s/around-the-world-in-80-days-by/2980234718728616/?ti=as . . . #solidarity #doctorswithoutborders #coronavirus #fitness #challenge #sport
And … the results of our virtual race are in! But first, some formalities. Thanks to all those who signed up! There were 68 participants across the race’s 8 categories. They were based in France, Belgium, Switzerland, Germany, Denmark and Ireland, and belong to 15 clubs. Now, the results: 5km: Winner (female): Pamela Grogan Winner (male): Paul Kennedy 10km: Winner (female): Crystal from BUFC Ladies Winner (male): Alexis Germon Half-marathon (21 km): Winner (female): Jenny Moore Winner (male): Julien Adler Marathon (42 km): Winner (female): Aisling Fenton Winner (male): Niall Moran Ultra (63km): Winners (female): Marla Candon and Brianna Hertford Winner (male): Paul Kennedy Triathlon: Winner (female): Eszter Iklódi Winner (male): Kevin Keary Ironperson: Winner: Declan Treanor Stage 6 Tour de France: Winner: Kevin Keary Average times, top three winners in each category and overall winners in each category can be found on the results sheet here 👉 https://docs.google.com/spreadsheets/d/1NcgIi__qi2uq96ITP4_nzHFQwTKBCjQsff9I13z2o84/edit#gid=2146777453 Watch this space because there may be a second round of the challenge in the works. Keep exercising (respecting the lockdown rules wherever you are, of course) and stay safe! . . . #lockdown #challenge #Belgium #GAA #BelgiumGAA #Europe #race
📣 Looking for a physical challenge to do next week? Then sign up for our virtual race starting on April 20th! ▪️What is it? You have one week to complete a (virtual) race in the competition choosing from the following categories: 5 km - 10 km - Half-marathon (21 km) - Marathon (42 km) - Ultra-marathon (63 km) - Triathlon (30 km run - 80 km cycle - 280 burpees) - Ironperson (42 km run - 150 km cycling - 500 burpees) ▪️How can I register? Contact our PRO Fiona (pro.belgium.europe@gaa.ie) or send us a message on Facebook, Twitter or Instagram and she will forward you the link for the google sheet where you should register your name and club in the correct category. You can register for a maximum of 2 categories, but you can't combine your kms to cover both categories (i.e if you register for the 5 km and 10 km you need to run 15 km!) ▪️What happens then? Fill in your daily progress on the sheet. You can break up the kms as you wish and don’t feel you need to do something every day. At the end of the 7 days we’ll announce the winner in each category. ▪️Any other rules I need to know? For the shorter distances (5 km and 10 km) you can choose, if you wish, to do a full 5 km or 10km more than once in the 7 days, and register your fastest time. In that case the distances can't be split over separate days. We're depending on your honesty in reporting your results! Please also remember that all participants are expected to fully adhere to national regulations on social distancing and exercising during lockdown. . . . #lockdown #challenge #Belgium #GAA #BelgiumGAA #Europe #race
Teamwork in the time of corona 🙌 Over the past four weeks, to maintain our support network, stay in touch and encourage each other to stay active, the Belgium GAA ladies embarked on weekly fitness challenges. So far we have, as a team, run 2074 kms (including the letters 👆) and done 13.7 hours of plank, alongside a host of other activities in various locations in Belgium, France, Ireland, Canada and Britain. This weekend we want to wish all our friends and family wherever they may be a happy and healthy Easter. Ní neart go cur le chéile ~ L'union fait la force ~ No strength without unity 💪 . . . #coronavirus #COVID19 #fitness #strength #unity #GAA #BelgiumGAAabú