On Saturday 6 November, the European football finals took place in Maastricht, for the third and final time in as many years. It was an epic day for Belgium GAA, the only club to bring 6 teams (plus a number of supporters) to a tournament, which was attended by 420 players in total.

The day started off like any other November morning, dismal and grey, as everyone waited around Schuman for the convoy of cars heading to the Netherlands. Thankfully, by the time the first whistles blew, the rain had eased slightly and by the afternoon, some watery sunshine trickled through the clouds.

The Belgian Men were divided between two competitions: Championship and Shield. Although recording a definitive win over Luxembourg, the A team came up against severe resistance from Den Haag and Paris, and came 3rd overall in the Championship. The B team went confidently into the Shield, recording wins over Lyon and Rennes, before being beaten by a mere 4 points by Amsterdam (the ultimate winners of the Shield tournament) in their last group match.

Meanwhile, the C team, also playing in the Shield, faced some difficulties against Liffre and Prague, but beat St. Malo in the final group match. In the words of Dave Barrett, “To put this in perspective, St. Malo beat out the Bs in Munich and also in a playoff on Saturday. In our home tournament in June, I felt afterwards we were wasting our time as the lads were trampled on. However, the team was much stronger on Saturday and we’d expect some of the lads to step up to the A & B teams next year.”

For more of Dave’s analysis in the coming days and weeks, read his blog here.

Although confirmed as European Ladies Football Champions (since the Munich tournament in September), the Belgian ladies were not about to take the day lightly. For the first time in their short history, the squad boasted 3 teams (A, B and An Bheilg), and each team marked their own victory on the day. The A team won the tournament, beating Paris in the final, the B team overcame Copenhagen in the 5th/6th place play-off, and the C team beat Paris Gold in the 7th/8th place play-off. Many thanks go to our (injured) sideline staff, Laura Whiskerd and Stephanie Dunn, who managed to be in about 6 places at once.

All credit to Maastricht Gaels and to all those involved in making Maastricht yet another memorable tournament on the European GAA calendar.

Photos of the day, with thanks to Stephanie Dunn and Jelena Radakovic, will be available on the website as soon as possible.

It’s that time of year again, when Belgium GAA descends on Maastricht to play football and cause all kinds of trouble, both on and off the pitch. This year, at least 70 Belgium GAA members will cover the short journey to the Netherlands, where 10 ladies teams and 19 mens teams will go to battle. Numbers and spirits are high. Below is a photo of the club’s 2008 crowning achievements…may 2010 be as fruitful again! 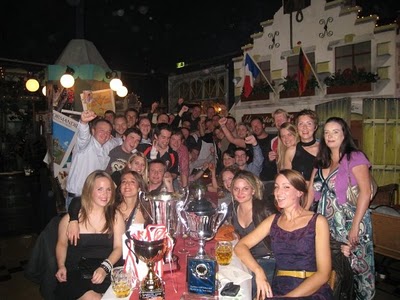 Come along to our Halloween themed quiz, complete with scary cocktails, spooky music, and the opportunity for you all to get dressed up in your ghoulish gear (optional but preferable). There will be great prizes on offer.

€5 per person, maximum 5 people per table. Reserve early and on time by emailling Laura (lwhiskerd@gmail.com).

De Valera’s have kindly offered to award a €100 prize for the Best Costume of the Night!!!

Jersey take honours in Shield round

Congratulations to Belgium GAA who have retained their ladies football championship with two rounds still to play. The Belgium club have now won four rounds and with the winners of each round collecting 25 points, second place 20pts, and so on, no team can overtake Belgium. Runners-up position is still up for grabs with Paris Gaels, Holland Ladies and Munich all in with a chance.

Reigning European football champions, The Hague, who defeated Paris Gaels in the men’s Championship round, came from behind to clinch the first round in an exciting final which saw them overhaul Paris Gaels who appeared to be heading for the points when leading by four points with just with five minutes left. They will be difficult to dislodge after a good start but all the teams including 3rd placed Luxembourg, Belgium, and Guernsey competing at this level for the first time, fought hard and there was little to choose between them at the group stage. Next month Stockholm Gaels and Budapest Rangers will enter the fray and present new challenges for these five. This is also the first time that seven teams have entered the premier men’s football competition.

Jersey Irish made the long journey from the Channel islands and were rewarded by taking in the first round of the Shield with a hard fought victory over Frankfurt Sarsfields who were making their seasonal debut. St. Malo, a team of indigenous French players surprised most observers by taking 3rd, place whilst Belgium “B”and Copenhagen were in the mix until the final group game. Next month other clubs are expected to join this group in what could be the most exciting Shield competition in years.

15 teams competed in 36 games in warm sunshine in a superb tournament excellently organised by the Munich Colmcilles club and officiating by a team of referees drawn from European clubs. Afterwards, the 200+ players and supporters enjoyed a typical meal in the Augustiner Brauhouse, Munich’s oldest brewery dating back to 1328, where they also had a sneak preview tasting of the „Oktoberfestbier“ brewed exclusively for Munich’s Oktoberfest, which celebrates 200 years beginning next week.

The next round takes place in Budapest in Hungary next month (Oct.9th) with the final round of all three competitions being hosted in Maastricht (NL) on November 6th along with the ECB gala presentation night.

Ladies Chp – Best five rounds from seven are counted; in Men’s competitions all three rounds count. The Men’s competitions entries are decided after the completion of the five regional leagues which were contested by almost teams before the summer break.

On 16 July 2010, Belgium GAA travelled by plane, train and automobile to the European Hurling and Camogie Finals in Zurich. The hurlers went to complete their clean sweep of tournaments, going into the tournament already confirmed as European Champions. They acquitted themselves with aplomb, winning the final against Zurich.

The fate of camogie was less certain; with formidable opponents from Luxembourg, Paris and Zurich putting them under severe pressure to maintain their spot at the top of the table. Nevertheless, heroic effort from the whole team saw them win both the Zurich tournament and the overall European Championship for the very first time.

It was an epic weekend, punctuated by 8 hour train journeys and finished off with a spectacular rendition of “We are the Champions” back in the Hairy in Brussels.

To read more about the trip, and other Belgium GAA events, read our newsletter.

A note from Eoin Sheanon:

Congratulations to Munster on their performances throughout the tournament and their deserved victory in the first Belgian Interclub tournament.

The tournament will finish next Tuesday (20 July 2010) with winners Munster and 4th place Dublin playing against 2nd place The West and 3rd place Leinster. The game will kick off at 19:30 in Parc 50 and will be 30 minutes a side with rolling subs. It will be 13/15 a side depending on numbers and everyone is invited back to the Old Oak for the first night of Collie Byrne’s stag party and the presentation of the cup to Timmy O’Donovan’s Munster. There will be finger food and a belly full of beer, ahead of the Belgian national holiday on 21 July.

Both Munster and CUC came into the final round of games unbeaten as the crowds swelled around parc 50 in anticipation at what was expected to be the showcase match of the tournament. Though a quick glance at the sides during the warm up told a different story. Munster were boasting a particularly inflated squad of 14 seasoned pros while CUC looked to have the bare minimum to field a team. Both provinces however, especially Ulster, have come through worse in the past (historically speaking) so to write them off would have been a massive error and one this reporter was certainly not going to make. END_OF_DOCUMENT_TOKEN_TO_BE_REPLACED

With the “Coalition of the Willing” beaten by “Mercenaries Inc.” the Doobs still had a glimmer of hope of making the final. Standing in their way would be Leinster Lite playing for the not insignificant prize of their pride (at least half of this team has been seen marching for Pride). END_OF_DOCUMENT_TOKEN_TO_BE_REPLACED

Cork, Tipperary, Limerick, Waterford, Laois, Offaly, Cavan, England, Kenya, Romania, half the FC Irlande football team, anyone who has ever stepped into the hairy for a pint and the referee: 2-10

On the way up from Strasbourg yesterday afternoon the man on the radio told me that there was a heat wave in France and that all old people should stay indoors.

No wonder then that the Dublin team was without Fergal Mythen, Martin Crowley, Conan Mac Oscair and Denis O’Sullivan. What with a combined age of 603, better the lads stayed at home with their slippers and fixadent, than suffer heat stroke out in the Parc 50. It did leave Dublin extremely short and with only ten men in the stifling heat the Dubs struggled to impose the running game that had been so effective against The West last week. END_OF_DOCUMENT_TOKEN_TO_BE_REPLACED

Background: the illustrious captain of Belgium GAA’s Mens Football A team, Eoin Sheanon, took it upon himself to rally the troops during the unexpected mid-season off-season of European football, by organising the very first Belgian Interclub League. With a wealth of players to choose from, the players were divided (very evenly*) into 4 teams: Munster and Europe; Dublin and France; Connaught, Ulster and Non-Aligned Territories; and Leinster and the Americas. Here is his account of the first fixture, on Wednesday 30 June.

The Dublin versus the West game was a real humdinger and a tale of two halves. The West dominated the first half with Giller marshalling midfield and Francis in flying form scoring three points from play. In the second half Alec and Diarmuid, with the outside of his boot, completely controlled the centre of the park. Hudson had a fantastic second half keeping Francis scoreless but despite O’Dowd keeping the scoreboard ticking over, the West needed a hero. Cometh the hour, Cometh the man, and the self described Antrim Maradona, Oliver O’Callaghan was on hand to get in between the Davide, our imported Dub who hadn’t put a foot wrong and Fergal who had been solid all evening to fist home an unlikely winner and rescue a well-deserved point for Liam-Kelly-less West. Special mention to Paul Hagan who won a heap of possession around the half forward line and Alan Rowan who really got going in the second half but Man of the Match has to go to Oliver O’Callaghan with the never-say-die attitude that earned his team the draw.