So I’ve been a bit late getting this up for 2017. Apologies for that – long story involving our website and some domain snipers from China… but that’s besides the point! The main thing is, we’re back in business and so is Belgium GAA – back in action for the 2017 season and rearing to go!

As always we’ll be challenging on all fronts and aiming to become European Champions across 4 codes – we’ve held all titles at the same time before, but we have yet to win them all in the calendar year – a bit like Tiger Woods with the majors 🙂 – so maybe 2017 is the year!

So what’s new? Well, to be honest, quite a lot! Here’s what you need to know!

The footballers will be looking to pick up their first European Championship since that famous day in Maastricht in 2012 when a win over Guernsey brought the trophy back to Brussels – how time flies! The team is under new management this year with Olof Gill handing over the reigns to Declan Treanor as manager. We take this opportunity to thank Olof for his efforts over the last couple of years; now he can concentrate on continuing to do the business on the field! Declan has been around the club on and off since 2012 and brings a wealth of knowledge and experience to the group. A former Dublin panel member, Declan is an extremely high calibre coach and it is fantastic for the team that he’s taking over. Joining Declan on the management team will be former team member Ciaran Hudson, along with Damien Columb (statistics) and Paul Quinn (Football Officer).

The first outing of the year was in the Den Haag tournament on the 8th of April. The side looked strong throughout the day, reaching a final against Luxembourg where they were unfortunately beaten thanks to a late goal on a scoreline of Luxembourg 1-8 1-6 Belgium. The Shield side were also in action, but had a disappointing day in a particularly strong Shield competition. Still plenty to build on, and both sides have picked themselves up already and used the defeats to spur them on in training.

What does a team do after they win their 9th Championship in a row? Try to make it 10-in-a-row of course! That’s the challenge facing our ladies footballers this year, and what a milestone that would be! Our club’s most successful team have done it all since the team was formed in 2008, winning every European Championship that has been available to them, and even going on to win games over British Champions. This year they have a chance to really make history – how many teams can you think of that have won 10-in-a-row? I can’t think of any. We’re all rooting for you, girls – bring the cup home again!

It won’t be easy of course, and the competition is set to be stronger than ever this year. The effort being put into training thus far shows that the girls are really tuned in to that reality. Changes aplenty on the management side for the girls, with Marla Candon coming in to take over the coaching alongside Margaux Mansanarez who has been named as team captain for the 2017 season.

The ladies footballers also had their first competitive outing of the year on the 8th of April in Den Haag. They met Holland in the final and controlled the game throughout, winning by a scoreline of Belgium 1-11 0-6 Holland. A great start to the year, and Marla and Margaux will be looking to ensure the team build on that early momentum in the upcoming tournaments.

We’ve been going through something of a golden spell of hurling in the club over the past few years, and the win in Dresden in October 2016 secured a famous four-in-a-row for the lads. This is a significant achievement, particularly given how competitive the European Championship tends to be, and so it is great to see Belgium performing consistently well year-on-year.

The new season brings change to the management setup. Manager Dave Barrett stays on for the coming year, but 2016 Championship winning captain Caoimhin Ó Coighligh has stepped down from the role and is replaced by Brendan O’Donoghue. Brendan is the 2016 hurler of the year and having shown much leadership last season, he is a perfect fit for the role. The new management team also inititially included former UCD Freshers manager Eoin Ryan, however Eoin will unfortunately be leaving the setup in the coming months when he heads back to Dublin for work. On the coaching side, its also great to see Adrian Hiel, stalwart Belgium GAA goalkeeper, come back into the setup to help out with the training – you can never have too much experience around a side, and Adrian has plenty of it.

The team is in training ahead of the start of the season and had their first outing of the year on Sunday the 23rd of April with friendlies against Den Haag and Amsterdam. They will now be preparing to compete for an historic 5th Championship in a row.

Similarly to the hurlers, our Camogie team has been going through a particularly successful period and also completed an impressive 4-in-a-row in Dresden last October. With good numbers at training already, the girls will be looking to build on that success and have another great season in 2017.

On the management side, Grainne Corry and Meadbh Bolger will be at the helm this season and looking to drive the team onward towards an historic 5-in-a-row. Gráinne and Meadbh are both talented and experienced camogie players and both impressed greatly in 2016. They’ll be looking to lead by example once again, improve the skills of the players and get the team working as impressively in 2017 as it has done in recent years. 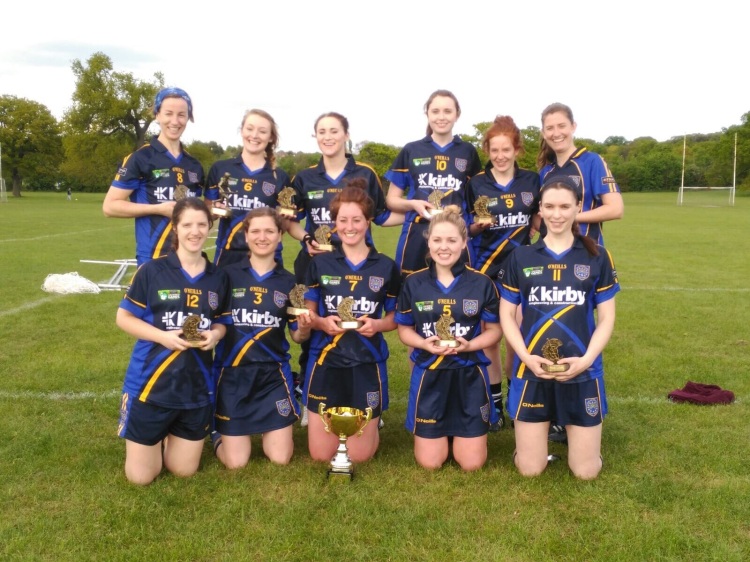 The girls had their first outing on Sunday the 23rd of April with a narrow friendly loss to Holland. Additionally, members of the Belgium Camogie team travelled to London on the 29th of April to represent Europe at the Tara Camogie 7s tournament. Impressive performances throughout the day from the players from Belgium, Hamburg, Eindhoven and Amsterdam gave Europe the win. The Belgium players will take encouragement from the part they played London and indeed from their performances against Holland in the friendly, but will also now be well aware of the talented players the other European clubs have at their disposal; it’s set up nicely to be a great Camogie Championship 2017!

Next up is the Eindhoven round of the Football Championships on the 6th of May. Our Men’s and Ladies teams will be heading to Eindhoven with every intention of bringing home the silverware given the ladies won their first tournament in Den Haag and the men came within a whisker of winning theirs. Both will have strong panels travelling and it is set up to be a fantastic day of football.

On the hurling and camogie side, the 20th May will be the first tournament of the year in Luxembourg. The hurlers will see this as the perfect place to pick up where they left off last year, and indeed it was in Luxembourg where they convincingly beat a strong Amsterdam side in the final and got their successful season underway. The girls will also be looking to start the season off with a win, and will have a very strong side travelling with some new talented players having joined the panel during the pre-season.

The very best of luck to all our teams in the upcoming tournaments, and be sure to check in on our Facebook, Twitter and Instagram pages to find out how they get on.

Also, always remember that newcomers are welcome at all times; this club is only as strong as its membership and we are constantly looking to grow. Would you like to come down and give it a try? You’ll be more than welcome – get in touch!