15 a side European Championship comes around once a year. The winners go on to face their British counterparts.

A true Benelux battle from our Ladies

On a blistering Saturday afternoon, the Belgium Ladies footballers victoriously fought what can only be described as two battles – one against the excruciating 30 Degree heat and another against a formidable combination of Holland and Luxembourg ladies.

In the early opening minutes of the game, it became clear that the strong combination of Holland and Luxembourg was truly going to ask us to dig deep and give everything we have to overcome their combined strength.   Both sides were fairly slow to get off the mark in the first half. After, however, the dashing runs of our Belgian full forward line of Irene Kirwan, Caragh O’Connor and our French reinforcement Laure Confrey we started to pop some much needed points over the bar. Hollux also answered with some great shots from outfield, they always looked dangerous.

The goals and the points started to come from both sides in the second half.  After 15 minutes into the second half, it became clear, however, that despite our efforts, Hollux were always dangerous. Hollux seemed to have the uncanny ability to answer our goals and points with more goals of their own and slowly the scoreline began to grow immensely. Many times, only one point narrowly separated the teams. Our back line was working hard to stop the solo runs from mid field into their target forwards who were very capable of mastering a swooping goal!

But none of the Belgian ladies gave up fighting and, despite previous experience, the team did not let this biting Hollux attack upset us or up heave our structure. The defense, after strategic switches, got to grips with the Hollux targets, the midfield dug deep and miraculously found a second source of energy and the forwards cleverly used the space to slowly start taking the edge over Hollux. A crucial goal from Irene gave us time to breathe and regroup and find our inner strength. The points started to go over, the frees came and the Hollux net shook.

With a final scoreline of 4-8  to 5-14 I think it is fair to say that Belgium ladies truly fought a great battle of heat and strength and came out stronger and more energized for the next 15 a side game against the English Junior Champions in October. While there was some lovely movement, support and scores last Saturday, it is clear that the fearless Captain Anay Rios will ensure that we learn from the day and refine those positive aspects in the coming weeks of training and in the lead up to October. All roads lead to Croker!!!! 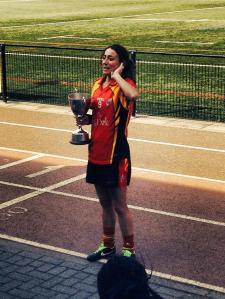 Belgium GAA were narrowly defeated by Amsterdam GAA in the final of the European mens ‘Premier’ Championship in Maastricht last Saturday. Following the walkover given by Luxembourg in the semifinal, Belgium received a bye to the final and went into the game with high hopes of overturning last years defeat.  Amsterdam started better, poaching a goal in the first minute but Belgium responded with intelligent, heads-up football and scored several points in succession. Excellent link up play from the backs through the midfield led to some fine points, in particular from Cillian O’Donoghue, and Belgium were soon level at 1-1 to 4 points. Phil “Crusher” Cushen was as dominant as ever, winning hard ball and forcing turnovers, and getting great ball to Naoise O’Brien on the wing. His direct running was causing problems for the Amsterdam defence and led to Belgium taking the lead when O’Donoghue converted a penalty. Amsterdam responded with a goal of their own, but Belgium finished the half the stronger team and went in at half time with a 2 point lead; 2:1 to 1:6.

Amsterdam again started the brighter in the second half and reeled off three well taken points to go in front . The onus was now on Belgium to take the game to Amsterdam but while the team had a large majority of possession, scores were proving difficult to find. The hard running of Phil Cushen was also missed badly in the second half after his injury and, with Amsterdam funnelling players back intelligently, there was very little space for Belgium forwards which led to some rushed and wayward shooting . Despite two more points as time ran down, Amsterdam were able to defend and break up field to keep their noses in front. In the end, they ran out two point winners, 1:8 to 2:7. Amsterdam will now go on to represent Europe in the Leinster Junior Championship and Belgium GAA wish them all the best. Belgium will lick their wounds and regroup for the European Championship later in the year.