The  season is under way and, if training’s anything to go by, it’s going to be a good one. Colin Byrne, who recently took up office as Chairperson of Belgium GAA, gets us going with his foreword to the season.  He looks back on how far Belgium GAA has come as a club, the acheivements of last season and forward to the big one, the first ever World GAA Games.

It is with great pleasure that I am writing this 2015 introduction for Belgium GAA as they get ready to fly to Abu Dhabi for the inaugural GAA World Games in March. For our club, just over 10 years old, to be representing Europe and competing against teams from all over the world is a huge honour and testament to the tireless work put in by our players and members over the years.

Like most of the players who will be competing in Abu Dhabi, we face particular challenges in building a GAA club in an unfamiliar country with a strange language and no concept of Gaelic games. When we started training football in 2008 Belgium GAA had no pitch, let alone changing rooms. But we were very lucky to have a core group of members who had a burning desire to set up a football and hurling GAA club, for men and ladies, in the heart of the Capital of Europe.

We were also lucky to be in the ‘Benelux’ region, which meant we had teams within 2 hours of us to play – a mere stone’s throw when compared to the distance some teams in Europe and elsewhere in the world have to travel.

Our all-conquering lady’s football team has now won 7 European Championships on the trot, and also reached the quarter final of the All-Ireland Junior Club Championship in 2014, losing out to eventual winners Murroe Boher from Limerick after beating the British Champions Wolfe Tones from Liverpool in a qualifier. Our men’s team is also one of the most consistent in Europe, winning 2 European Championships since 2008 as well as several Benelux regional titles, a Nations Cup and European Sevens title along the way. We have a 4-times European Champions’ hurling team while our camogie team have also 4 European Champions’ medals in their back pockets.

With all this success in Europe, it is now a great honour for us to go and compete against the best from around the world. Gaelic Games have greatly developed in recent years allowing for a unique event such as World GAA Games to be organised. Amazing work done by the Middle East GAA, GAA’s youngest County Board, will welcome teams from Australia, Canada, Europe, Middle East, New York, North America, South Africa and South America. This trip would not be possible without funding from additional sponsorship, in addition to that which we get from our main sponsors. Belgium GAA would like to thank especially Trifol, Cynar Plastics, Wild Geese Irish Whiskey and BNP Paribas for their generous support for this event.

Lastly, I would like to wish the players travelling all the best, because they certainly deserve it. They have been back out training for a few weeks in the freezing cold of Brussels to prepare for the heat of Abu Dhabi and we have no doubt they will do our club and Europe proud when they get there. 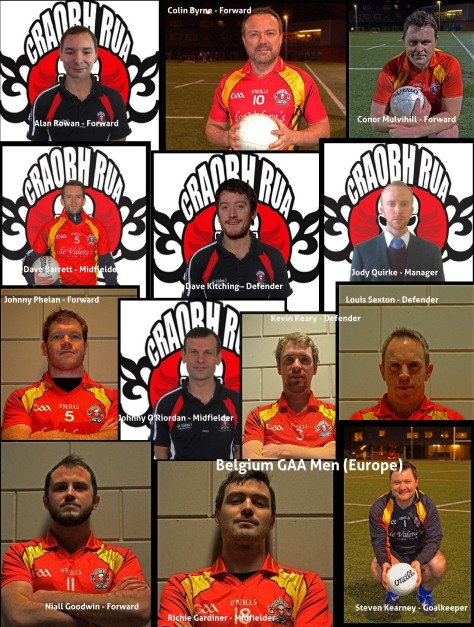