It is cold, it is wet, it is miserable and yes, it is early July. This is unfair. It is bucketing down and wet and cold and *gasp* Belgium have been knocked out of the World Cup. Its just not fair or ok. With nights without 3 matches ahead of us, its going to be a strange summer to adjust to again – and having seen a montage of weeping Brazilian children, women and men set to an achingly beautiful Garth Brookes song, well, its just an emotional overload – akin, I’m told, to being a Mayo football supporter.

From Etterbeeks finest son, Marouane Felliani, brought up mere meters away from our training ground in the VUB, to the somewhat eery similarities with the Irish named Kevin De Bruyne, who IN NO WAY LOOKS LIKE ANYONE WHO PLAYS FOR BELGIUM GAA…we’ve had a rollercoaster World Cup ride.

Nope, no one at all (no names, but think of a handy footballer/super-striker impact player of mysterious origins in the club and see what I mean). Much more handsome of course. But still. Uncanny.

We no longer need to talk about Kevin, but we now need to talk about Bayern, being in Deutschland, and being involved in a sports competition that is *more exciting* and *more tightly fought* than last nights Germany v. Brazil wipeout. Yes, the fortnightly Belgium Ladies Interleague competition. No. I jest. I joke. The InterLeague continues, but the turning of the tides and the passing of the months means that we’ve arrived at PAN EUROPEAN COMPETITION TIME (for the ladies, and an equally exciting, but somewhat different combined regional tournament / pan-Euro grading event to decide which level they will play at October’s Pan-European event in Maastricht for the men). This means more teams, more competitions, more matches and much much much more fun! PARTYZEIT KIDS!

Do you want to go home yet? The answer, at all times, should be the following. “Nein man, ich will noch nicht gehen, ich will noch ein bischen tanzen”. Here’s a nifty tune to help you to say no to going home, specially for you.

Munich you say, tell me more!

listen),[2] Bavarian: Minga) is the capital and largest city of the German state of Bavaria. It is located on the River Isar north of the Bavarian Alps. Munich is the third largest city in Germany, after Berlin and Hamburg. About 1.47 million [3] people live within the city limits.

So, for the first time in three years, we’re setting off to play in the home of Munich Collumcilles, a club founded in 2001 by a group of Irish ex-pats in the Englischer Garten, they’re both a hurling (at underage) and a football club (ladies and mens). The Colmcilles have their own (gorgeous) training grounds within SV Gartenstadt Trudering, and it is there that 9 mens football teams from County Europe and 7 ladies football teams will face off, in again, inclement weather (we’re currently promised a thunderstorm, oh joy, oh raptures). Last time we played in Munich we all got sun stroke, so perhaps a little rain mightn’t be a bad thing.

Given the distances involved, its perhaps not surprising that the predominant areas represented in this 1st PAN EURO COMPETITION are Benelux, Central and Eastern Europe, with no represntation from Iberia or the Northern European Clubs. Which is a pity, but I’m sure we’ll see more of them in September when we head up to Stockholm. But that’s me getting away with myself.

Who are the teams you say? What are they like you wonder? Well, hold on to your seats as we go through the few teams that will be competing this weekend.

Belgium A – Belgium B – Paris – Munich A – Munich B – Vienna Gaels – Zurich Inneoin.

Though Rennes head the Ladies Championnats de France & îles Anglo-normandes 2014 Paris is travelling to Munich, Belgium are the only team from the Benelux region to join and the Eastern and Central European region are represented with heaps of teams. 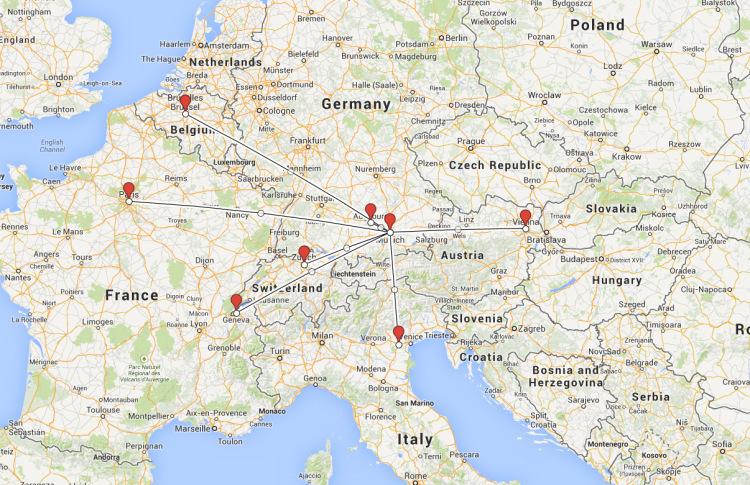 Munich mens and ladies A teams have topped the Eastern and Central region – so no matter what the weather brings, we’ll certainly have great football ahead of us. And Sunday – a mere matter of a million more matches, and this site, pending recommendations from our Munich hosts, gives us a few options for where to watch the World Cup final, definately surrounded by  few excited Germans!