If you’re not heading to hurl this weekend, there are really interesting alternatives on offer for those of you who are in anyway historically minded. Tomorrow, Saturday, is the 100th anniversary of the assassination of the heir to the Habsburg throne, Archduke Franz Ferdinand and his consort of the Austro-Hungarian Empire, an event in the powder keg of the Balkans that would spark a series of events that ended up in the brutal organised senseless killing of World War One. ‘Plucky Little Belgium’, home of the trenches played a significant part in this theatre of war. A complex series of agreements – unabashed militarism, convoluted alliances, imperialism and rampant nationalism all combined to plunge Europe into a devastating 4 year war.

“Germany’s invasion of neutral Belgium, which led Britain to declare war in August 1914, should have been swift and fierce yet the unexpected heroic defence, against great odds, of Belgian fortresses, frustrated the German Schlieffen Plan for a thrust to Paris and a lightning victory. The plucky Belgian resistance proved successful in buying time for French and British troops to mobilize and report to the front, where the Belgians would then go on to fight, stubbornly defending the northern end of the Allied trench line for the rest of the war.” 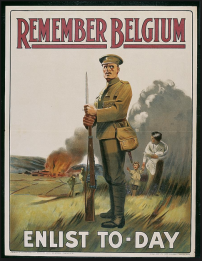 If you’re in Brussels and wanted to visit the excellent military museum – they have a dedicated exhibit for the centenary of the beginning of the war.

The city of Leuven have taken photos of the war damaged buildings and blown them up to huge size, and put them on display in front of the repaired buildings. It very much brings home the enormous scale of the destruction and devastation that was inflicted upon the country.

Ypres, in West Flanders, had been a major cloth trading town for hundreds of years, a flourishing area in competition with the northern towns of Ghent and Brugges, which was completely reduced to rubble over the course of the 1st World War. The European Communities Gaelic club (our sort of sister club) are going there tomorrow and have arranged a guided tour. For more information, and to register, click here. 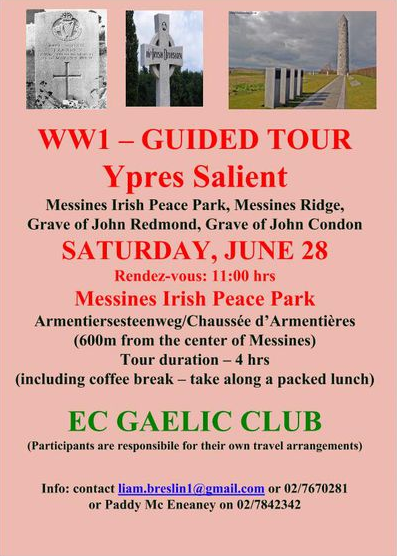 Make your way there for 11am –  bring as many hangsangades as you think you’ll need, and enjoy the day!