The first guest post by Martin and Paul (plus photos by Jane):
On 2nd June 2012, Belgium GAA held its first ever Cúl camp. The camp was held over two days at the excellent venue that is the VUB.

For a first-time camp with any club, numbers are always going to be an issue, however that was not the case in Belgium with over fifty kids participating over the two days. 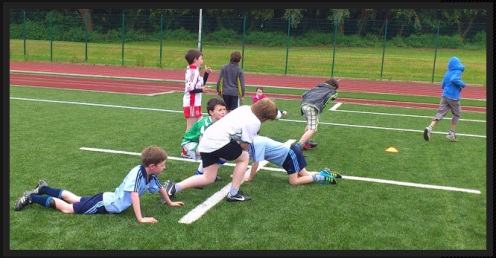 The camp was brilliantly organised by all involved, and the work put in by the organisers, parents, and club players was phenomenal. With any outdoor event weather is always the enemy but the Saturday got off to a great start with the high numbers attending and a dry morning, the kids were divided up into three age groups, and got straight to work with their different coaches. 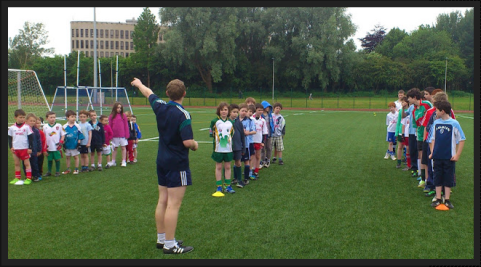 Before we knew it time flew by, the sun emerged, and the kids had dispensed every last drop of energy they had. The day finished out with a penalty shoot out, but not before all the kids showed off their best hurling skills.
The Sunday in contrast to the sweltering heat from the day before, was a washout. The VUB looked more like a swimming pool than a rugby pitch, and people were questioning would it go ahead at all.

The will to play football won out and 30 brave soldiers dawned their boots, gloves, armbands, and swim suits for what could only be described as an aquatic game of football.
The camp was a huge success and everybody involved should be hugely proud of how it turned out. The next generation of Belgium GAA stars are in safe hands.
At this opportunity we would like to thank every person involved throughout the two days and the weeks beforehand for their planning and organising. Who knows, maybe next year a week long camp could be possible.