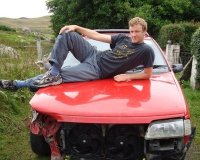 Belgium GAA’s own Olof was back with his own kind over the weekend as Clare Island entered the ferocious All-Island football tournament. The Clare Islanders, who had previously faced stiff competition in Belgium, were one of eight islands from Donegal to Cork who were prepared to battle for glory against some of their most hated rivals. Details of the weekend tournament are difficult to come by and few attempts have been made to communicate as it is assumed that legendary levels of intoxication will have rendered almost everyone involved completely incoherent. What is know is that both the men’s and ladies’ squads of Clare Island returned home victorious and Belgium GAA salutes them both!